Investing.com – Cryptocurrencies are loving and still have failed to recover significantly from the FTX debacle. Trading continues near cycle lows while there are doomsday scenarios that see the price drop below $10,000 next year.

However, former BitMEX CEO Arthur Hayes is convinced that the existing cycle lows represent a bottom. According to his argument, the sell-off has already peaked, as all the crypto companies that were threatened with bankruptcy have now gone bankrupt.

As part of the accompanying liquidity crunch, these companies were forced to sell off their most liquid assets, which of course included Bitcoin. Now, these companies are in a phase where they can no longer sell BTC before permanently disappearing from the market:

“If you look at the financial situation of any of these players, you will search in vain for Bitcoin. They sold all the bitcoins when they went bankrupt, and the sales had already taken place during the last survival period before that the fault inevitably sets in.

I expect the US bond market to be out of balance in 2023 due to Fed tightening policy…at this point I expect the Fed to turn on the printing press and then blow up the shaka-laka – bitcoin and all other risky assets in the will soar.”

Hayes is not alone in his opinion. Investor Cathie Wood believes the demise of FTX will help the DeFi sector experience accelerated growth. Indeed, dubious machinations are impossible in a transparent and decentralized trading environment:

“What we learn from FTX is how important fully transparent decentralized networks will be for financial services in the future… FTX, Celsius (NASDAQ:), 3AC were all closed networks. opaque systems. No one knew what was going on…”

From their point of view, this is the reason why Sam Bankman-Fried preferred to leave Bitcoin aside. Too transparent, too decentralized and therefore not controllable.

The cryptocurrency has held above the 23.6% Fibo retracement support at $16,986 for three consecutive days. However, trading is currently trading below and the December 7th low at $16,715 can be tested. 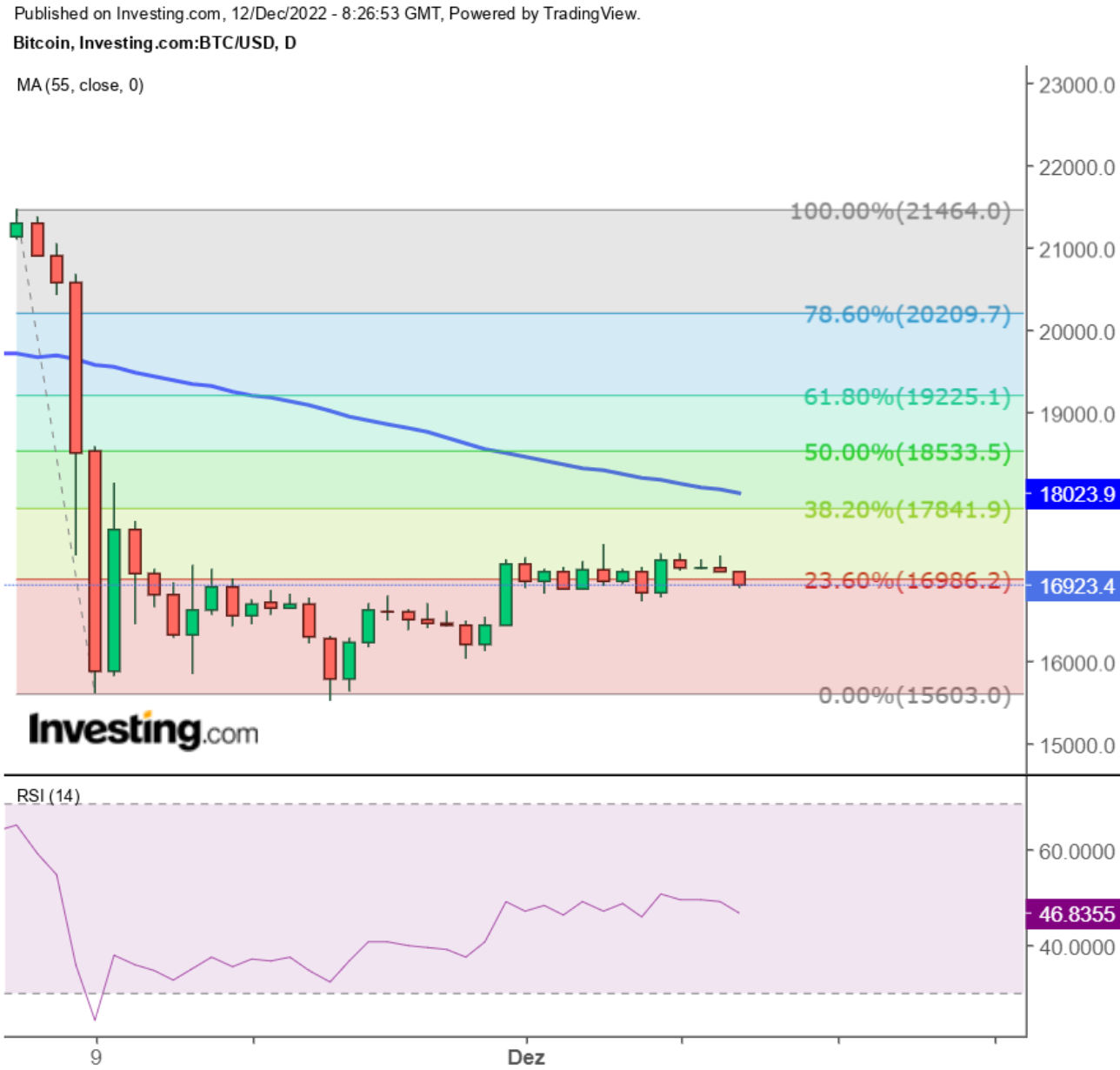 A daily close below this level would shift focus to the November 28th low found at $16,013. Below that, further losses towards the cycle low of $15,504 would be possible.

Only if it manages to maintain a sustained hold above the 23.6% Fibo retracement will the likelihood of a rally towards the 38.2% Fibo retracement of $17,841 increase. The psychological level of $18,000 and the 55-day MA which stands at $18,023 reinforce this resistance.