Markets have been relatively quiet over the holidays, with Bitcoin’s weekly volatility close to all-time lows recorded so far. As of Monday’s close, Bitcoin and Ethereum were up 2.88 and 5.12%, respectively. Additionally, Solana (down 15.65% by TVL – Total Value Locked – among alternative layer-1 blockchains), Ethereum scaling solution Optimism (down 6.98% among major layers 2) and Lido (with an upward movement of 9.17% among the largest DeFi players) the biggest swings in the past week.

Figure 1: Evolution according to TVL (Total Value Locked) and returns of the largest cryptoassets 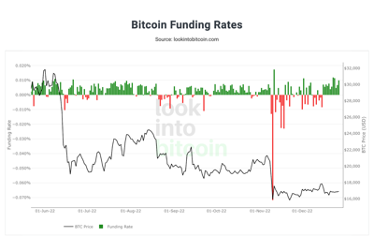 A look at the derivatives market shows that funding rates[1] Bitcoin has been consistently positive since Dec. 16, suggesting that many investors are now positioning themselves for higher prices following the market decline caused by last month’s FTX debacle (see Figure 2). 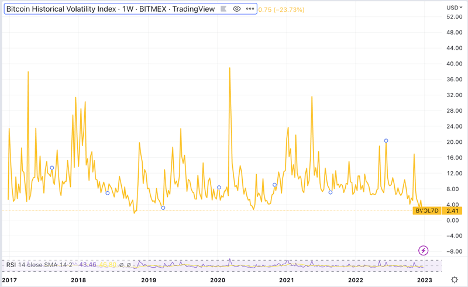 The BitMEX Weekly Historical Bitcoin Volatility Index is near an all-time low. There are only two other instances where we have seen similar levels of volatility over the past five years produce opposite results. The most recent precedent is July 2020, which marked the start of the last cycle’s bull run. The second drop was in October 2018, before Bitcoin experienced a 50% drop from $6,000 to $3,000. In both cases, we saw a spike in volatility, a trend we may continue to see in the coming weeks. 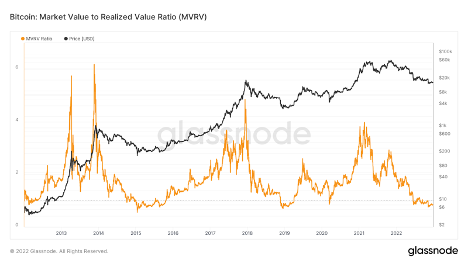 Figure 4 above illustrates the market value of BTC versus realized value. “Market value” refers to market capitalization, while “realized value” refers to the base bid price. Historically, high MRVRs have coincided with market highs, while readings below one have preceded past cycle lows. Last month’s MRVR ratio was the highest since February-March 2019, in the latter stages of the last bear market.

According to Bloomberg data, China’s economy slowed further in December amid the massive COVID-19 outbreak across the country. Therefore, the Chinese authorities have lifted their zero-COVID policy. As the National Health Commission (NHC) announced on December 26, the government will no longer quarantine travelers from January 8. On December 27, S&P Global released the S&P CoreLogic Case-Shiller Index, the primary measure of US home prices. Data released for October 2022 shows that US house prices fell for the fourth consecutive month.

On December 21, the United States Securities and Exchange Commission (SEC) announced that Caroline Elison, the former CEO of Alameda Research, and Gary Wang, the co-founder of FTX, had contacted FTX investors for their role in a multi-year fraud scheme. pleaded guilty and are cooperating with prosecutors. The announcement came after former FTX CEO Bankman-Fried agreed to be extradited from the Bahamas to the United States to stand trial on multi-billion dollar fraud charges. On December 22, Bankman-Fried agreed with authorities to release him on $250 million bail, backed by his parents’ fortune. The bond agreement stipulates that Bankman-Fried surrender his passport and remain housed at his parents’ home in Palo Alto while awaiting trial in New York.

Grayscale Investments said it is considering a takeover bid for up to 20% of the trust if the SEC does not approve the application to convert the company into a cash exchange-traded fund (ETF). The offer would go directly to shareholders, who would have to sell their shares, which are currently trading at a 46% discount. Grayscale sued the SEC last June after US regulators rejected the investment firm’s request to list an ETF. For better understanding, Grayscale is part of the Digital Currency Group (DCG) and is a sister company of Lending Desk Genesis Global Capital, which is at the center of the current turmoil in the crypto market.

On December 21, bitcoin miner Core Scientific filed for Chapter 11 bankruptcy. Greenidge, another mining company, reached an agreement with its creditor, fintech company NYDIG, to restructure approximately $74 million in debt. dollars. Amid rising energy costs and falling BTC prices, many miners are struggling to stay afloat. On November 18, data from Glassnode indicated that bitcoin miners were selling around 135% of BTC daily from mining and their reserves. In other words, the miners liquidated all the newly mined coins along with some of their BTC reserves. This situation could lead to the closure of more miners and further consolidation of the mining industry in the coming year.

In a rather late-breaking announcement, which also reflects the explosive year of growth in scalability solutions, payments giant Visa introduced a new proposal to bring automatic, recurring payments to the StarkNet network. The proposed system would take advantage of a new feature called “account abstraction,” a core part of the Ethereum roadmap that has yet to be implemented on the mainnet. Visa chose Starknet because the network already has this capability.

context: The Ethereum Blockchain includes two types of Smart Contracts: External Accounts (EOA) and Contract Accounts. EOAs have a private key and a public key that they can use to initiate transactions. On the other hand, contract accounts are smart contracts that rely on predefined codes to trigger specific transactions. In this regard, account abstraction refers to the process of unifying the two contracts under a single merged type. This makes it easier for users to interact with blockchain-based applications and allows user accounts to behave like smart contracts, which would open up many new use cases. For example, users can set up delegated accounts that process automatic recurring payments on behalf of users. Account abstraction can also unlock a wider range of innovative features that simplify the Web 3 experience for the average user, such as: increase security. 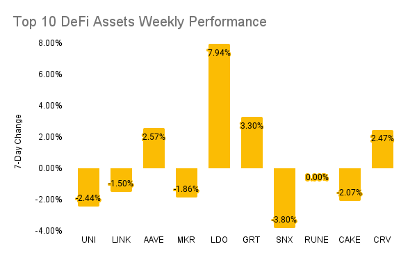 Currently, the largest crypto exchange, Uniswap, has announced a new collaboration with crypto payment service MoonPay, which aims to allow users to buy crypto directly with their credit cards. It was originally assumed that users would buy cryptos on centralized exchanges and then deposit funds into the MetaMask crypto wallet to interact with DEXs (decentralized exchanges) or use one of the payment methods already supported, such as Transak or Wyre. MoonPay now offers many more different options for users around the world to buy USDC, USDT, WBTC, WETH, and DAI on the Ethereum, Optimism, Arbitrum, and Polygon networks.

In addition, the CME Group, Derivatives market and crypto index provider CF Benchmark has launched benchmark rates for three top-notch sub-industry protocols: Aave, Curve, and Syntethix. CME will rely on multiple exchanges, including Coinbase, Gemini, Kraken, and Bitstamp, to provide pricing data for the three tokens. The latest offering from the world’s largest derivatives exchange, combined with the previously launched Uniswap benchmark, is expected to help the exchange provide institutional coverage for protocols that account for the lion’s share (40%) of total value on the Ethereum network. This move is significant as it pushes for greater involvement of institutional investors in the DeFi space. Finally, lending platform Aave DAO has ratified a new proposal to integrate Chainlink’s Proof-of-Reserves (PoR) system into the money market protocol. Although the opaque way in which centralized exchanges such as the defunct FTX operate does not reflect Aave’s environment, which lives entirely on-chain, there are still other security risks that the lending platform could be exposed to. . Namely, Aave will use Chainlink’s PoR tool to secure some of the protocol’s bridging assets. In other words, the protocol would offer collateral certificates for some of the transferred assets (as part of the bridging) from the Aave V2 and V3 markets on the Avalanche network, as well as tokens such as USDT, DAI and USDC. This would ensure that assets are properly audited before users can mortgage them, eliminating the need to rely on centralized authority to demonstrate the statement of reserves.

Lido Finance, the largest liquid staking platform after TVL, has launched the second version of its iteration on the Solana network. This new version improves the profitability of validators. First, there is no need for 100% commission nodes, second, validators now receive block rewards and staking rewards in SOL (rather than stSOL) directly in their accounts. Last but not least, the maximum node commission is set at 5%. The goal of these changes is to provide a safer betting experience for Lido users.

NFTs and the Metaverse

Continued consolidation to Ethereum and its Layer2

DeGods and Y00ts, two of the most popular NFT projects on Solana, have announced that they will be leaving the blockchain and migrating to Ethereum and Polygon. DeGods will move to the Ethereum blockchain, Y00ts to Polygon. Notably, with the Switch, Y00ts’ volume would be 41.4% of Polygon’s NFT volume. We believe this trend may well continue and result in more projects moving to Ethereum and its Layer2 blockchains, as the success of the merger has eroded the competitive edge of competing blockchains. Additionally, Polygon is lucky when it comes to partnerships – blockchain has recently attracted major companies such as Nike, Starbucks, Walt Disney, Instagram and Reddit.

Fidelity Investments has filed three trademark applications in the United States for a range of 3 web-based products and services, including an NFT marketplace and metaverse trading services. Fidelity is the latest major brand to join the Metaverse movement, in which big names from banking (eg JP Morgan) to fashion (Adidas, Gucci) are collaborating with Metaverse protocols to deliver digital user experiences.