The year 2022 has been a veritable test by fire for cryptocurrencies, leading to a sell-off and a decline in the overall market, suggesting that the gains in cryptocurrencies can be attributed at least in part to low interest rates. The growing correlation with the global stock market has made cryptocurrencies vulnerable to macroeconomic factors such as a slowdown in economic activity, geopolitical uncertainty, and most importantly, a change in central bank monetary policy. The popularity of decentralized finance technologies related to cryptocurrencies (De-Fi), NFT tokens and smart contracts has slowed, and the daily transaction volumes processed on the network of the two largest cryptocurrencies, Bitcoin and Ethereum, have risen since the last bull in the year did not show significant growth in 2018, calling into question the continued adoption of digital assets.

With speculation still alive and potential catalysts for renewed interest in the cryptocurrency industry, here are the factors that could affect cryptocurrency valuations in 2023.

What could lead to a resurgence in the crypto market?

Oversold – The cryptocurrency market uses the concept of cyclicality to refer to the bull and bull market phases of Bitcoin. Each of the previous cycles has been marked by negative events caused by, among other things, the sale of unprofitable miners, the capitulation of long-term investors and growing doubts about the potential of the entire industry. In 2022, we saw all of these factors, including the bankruptcy of the largest miner, Core Scientific, and a record supply of long-term investors. We can assume that all of the negative news that weighed on the industry in 2022 is already being reflected in prices, so deeper declines of a similar magnitude are seen as less likely. This, in turn, influences the unwinding of short positions, which are perceived as increasingly risky, and encourages investors who “Looking for a Floor” risk;

Halving Cycles – Cryptocurrency investors also use the so-called “halving” as one of the factors affecting the Bitcoin price by reducing the limited supply. The halving is an event programmed into the BTC code that cyclically every 4 years (approximately every 210,000 BTC blocks) halves the BTC supply and miner reward. Analysis of previous “halving cycles” revealed that bitcoin’s price started to rise around 1 year and 3 months before the halving, making April/May next year a realistic date for the next bull run. We will see how the first quarter of 2023 fuels interest in Bitcoin.

Monetary easing by central banks – 28 of the 31 central banks tracked by JP Morgan analysts have raised interest rates in 2022. The largest and most important of these, the US Federal Reserve, has dramatically raised interest rates, which are expected to reach 5% in the first quarter of next year. With economic activity slowing, inflation falling and the prospect of an expected recession in the United States, the Federal Reserve’s appetite for further rate hikes or maintaining interest rate levels tight interest could gradually diminish, leading to a “pivot” on Wall Street and the associated resurgence of risky assets such as cryptocurrencies and tech stocks. In 2022, these two investment groups came under pressure and were by far the worst performers;

Lower geopolitical risk – The biggest war in Europe since World War II, triggered by Russia’s attack on Ukraine, has slowed the pace of globalization and worsened investor sentiment in 2022. It has also led to an apparent polarization of Western countries to Russia and indirectly to Rightly Guided China. With Russia’s commodity-based economy still weighed down by falling commodity prices (oil, natural gas) in 2022, continued US and NATO engagement and successful counter -Ukrainian offensive, there will be another chance for a diplomatic solution to the war in 2023. In addition, US diplomats are continuing talks with China on the Taiwan Strait crisis and the technology sanctions imposed by the United States on China. This shows that the two countries are still seeking a diplomatic way out of the deep crisis in relations.

What could be fueling the continued decline of cryptocurrencies?

Bankruptcies and Collapse of Crypto Exchanges – 2022 has seen the collapse of the Luna/Terra blockchain, bankruptcies of cryptocurrency funds and decentralized lending protocols, and one of the largest crypto exchanges, among others. FTX. If we see another domino effect next year, we can expect Bitcoin’s depreciation to continue – with a massive exodus of investors from cryptocurrency exchanges, snowball sales and skyrocketing volumes. of so-called “stablecoins”. In 2023, investors’ eyes will be on the largest cryptocurrency exchange binance whose Mazars “audit” failed to satisfy investor curiosity, although withdrawals and stablecoins including Tether and Binance USD were handled transparently. The problem of rising energy prices could in turn keep the supply of bitcoin miners high, leading to the risk of further mining company bankruptcies;

adoption issues – As cryptocurrency adoption accelerated during the bull market of 2020 and 2021 as well as the euphoria surrounding NFT tokens and decentralized finance, today we see that in the face of the bull market, the use of Bitcoin and other cryptocurrencies in transactions is declining (although the potential for adoption is still evident in India and Nigeria). The average daily transaction volume on the BTC and Ether blockchain is around 1 million compared to 350 million on Mastercard and 150 million on Visa. Historically, there has been a significant correlation between Bitcoin’s valuation and transaction activity, because – like publicly traded companies like Visa, Mastercard, and PayPal – the use of Bitcoin in transactions is considered as one of the cornerstones of the evaluation of the “king of cryptocurrencies”. perhaps. Although the number of investors owning or trading cryptocurrencies has increased significantly in recent years, it is difficult to see this as a basic indicator of practical application. This could be due to, among other things, low interest rates and central bank fiscal policies, short-term trends, the popularity of cryptocurrencies as highly speculative investments, and the fact that over the of the past 12 years, investors who have accepted high investment risks have been particularly “rewarded” which naturally draws investors’ attention to risk. Today, with a crisis of confidence in the industry, another real launch is still in doubt.

The Fed hesitates – A number of factors could make the Federal Reserve reluctant to cut interest rates decisively or slow the cycle of hikes. The main risk in this area is stubborn inflation, well above the inflation target (2%), which could prompt the Fed to keep interest rates in restrictive territory, or at least firmly near 0. %, where they have been for nearly 12 months. and stimulate demand for risky assets. A number of mutual funds, including black rock, point to inflationary risks which, combined with a weakening economy and the Fed’s inability to bail out financial markets with rate cuts, could cause investors to give up. Factors that could contribute to inflation include a strong economy and rising wages, imbalances between supply and demand (supply chains), rising energy prices and de-globalization.

Decline of institutional interest – As we have seen very significant market shifts in 2022, including monetary policy shifts and the global political crisis, we can expect mutual funds to take a more defensive stance and disregard the global political crisis. interest in the cryptocurrency industry due to rising macroeconomic risk in 2023. In an environment of high interest rates and less risky instruments favored by investors, in 2023 we could see a declining investment in the industry by venture capital and private equity funds, which along with rising valuations will also drive the development of technologies in the cryptocurrency industry. An important role could also be played by the evolution of the concept of virtual worlds, the so-called metaverse, which several analysts consider to be correlated with digital assets. In 2022, its development has definitely slowed due to deteriorating conditions in the advertising industry, and another threat could come from weaker consumers who are less willing to spend on technological innovations like VR headsets and AR glasses.

Bitcoin chart, W1 interval
Looking at the chart on the weekly interval, we can see that the relevant AT event on the chart was the crossing of the moving average SMA100 (black) below the SMA200 (red) called the “death cross” – this s was produced about 10 days before the start of the war in Ukraine. Now we see that the distance between the SMA200 and the SMA100 is beginning to decrease, indicating a possible crossover of the SMA200 from below, referred to as the “golden cross”. This could be an event that – if it occurs – the probability of cyclical change has increased. Source: xStation5 by XTB

***
The “big” trading session is over from 8 a.m. to 10 p.m. German time. Many other brokers offer low spread only from 09:00 to 17:30 – XTB offers consistently low spread during BIG trading hours. Discover the XTB advantage. 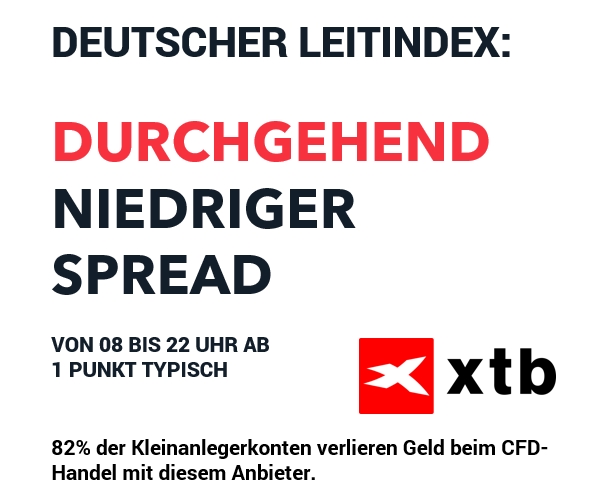 The author may be invested in the titles or underlyings mentioned.

The authors of the publications compile this information at their own risk. The analyzes and opinions are not written with reference to anyone’s specific investment objectives and needs. XTB’s publications that comment on specific situations in the financial markets and general statements of XTB’s employees regarding the financial markets do not constitute advice from XTB to the client and may not be construed as such. XTB is not liable for any loss arising directly or indirectly from decisions made regarding the content of postings.

CFDs are complex instruments and come with a high risk of losing money quickly due to leverage. 82% of retail investor accounts lose money when trading CFDs with this provider. You have to ask yourself if you understand how CFDs work and if you can afford to take the high risk of losing your money. Investment success and profits in the past do not guarantee success in the future. XTB content, newsletters and communications do not constitute investment advice promotional message understand.