Digital assets are becoming increasingly important in the financial sector. New investment products are emerging and technologies such as blockchain have enormous potential to make settlement processes more efficient. Both will also change the long-term fund industry.

Blockchain technologies and digital assets are changing the business of funds.

With around 60 trillion euros worldwide and around 20 trillion euros in Europe in the field of capital investments, the funds industry remains a segment of the financial industry that is growing by 5 to 10% per year. year. However, the “investment fund” product does not have a purely positive image. In particular, non-ETFs, i.e. funds that cannot be purchased via stock exchanges, are becoming less and less attractive to investors, although they still currently account for around 80% of the volumes mentioned. .

The reasons for this are certainly complex, but can ultimately be reduced to two central aspects for retail funds:

If we first look at the subject of sales, we quickly realize that traditional sales channels such as bank branches no longer meet the needs of the younger generation of investors in the retail segment. The expectation here is much more about access to digital products.

In addition, there is a growing awareness of costs, especially in economic situations such as those we are currently experiencing. However, this does not mean that the “cheapest” financial product is always chosen, but that the focus is on an attractive price/performance ratio.

Inefficiencies in fund distribution and settlement

If you look at the process chain that still has to go through when a customer buys a non-ETF, it quickly becomes clear that it is extremely inefficient and characterized by a large number of middlemen, as shown in the following figure. 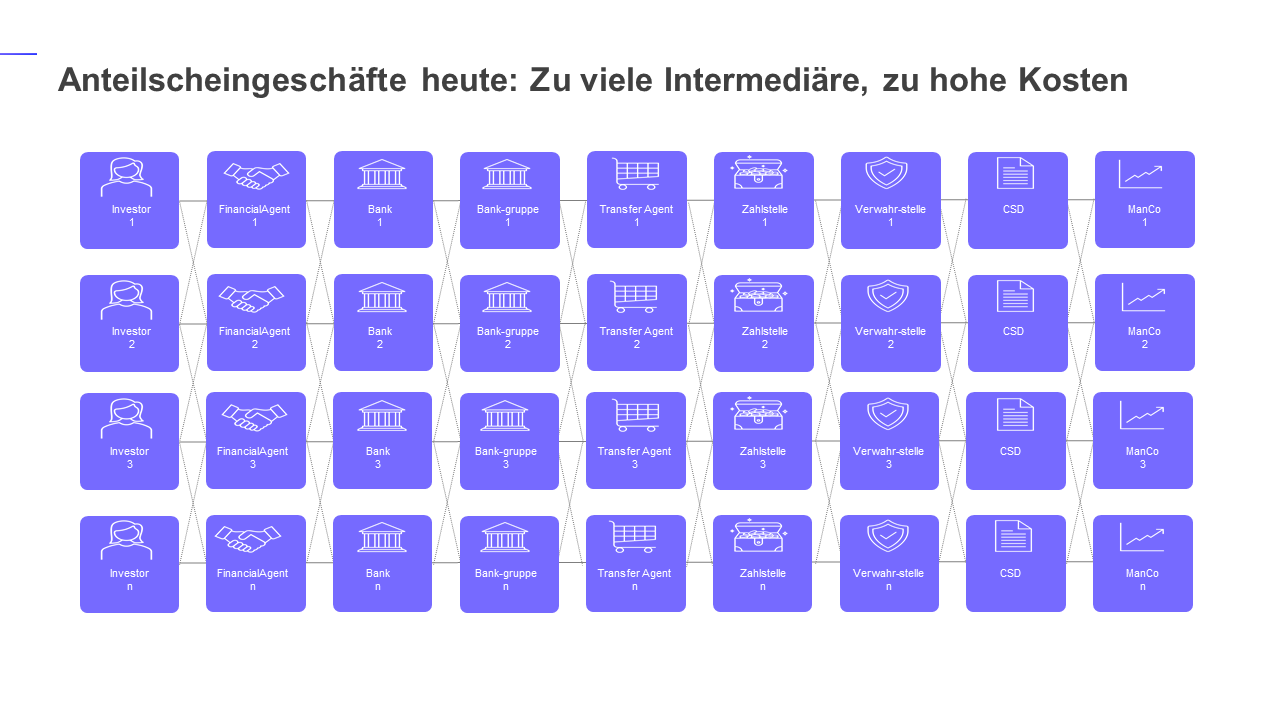 The current processing of funds is characterized by numerous intermediaries, process breakdowns and inefficiencies. Even if this is not visible to the investor: he bears the costs!

All these intermediaries collect different types of fees, such as brokerage commissions, processing fees, custody fees, transaction fees, etc., which the investor ultimately has to pay directly or indirectly. Not only does this make traditional funds less and less attractive in terms of costs, but it also means that the majority of these intermediaries provide little or no added value for the investor.

In summary, this means for fund sales:

And for processing funds:

Does this mean that traditional investment funds are a thing of the past?

Blockchain as a savior of the fund industry?

If you talk to representatives of the fund industry right now, there is no euphoria or need for rescue. This applies to money management companies, asset managers as well as banks that provide services to the fund industry.

At the same time, however, all market participants are well aware of the above mentioned problems in the fund industry. Whether the targeted use of blockchain technology could possibly play a key role here is still a controversial topic of debate, especially when it comes to the tokenization of fund shares. It is not uncommon for counter-arguments to be made, such as “until the assets in the fund are digital/tokenized, a tokenized fund shell is useless”. But this statement is insufficient and delays urgent innovation and digitization of the fund industry.

Two perspectives for the use of blockchain in the fund industry

How and why the use of blockchain can help solve the above problems will be examined from two different angles below:

Before delving into the first point, it is important to discuss the difference between dematerialization and tokenization. While dematerialization is initially an entirely digital issue of funds, i.e. without the share certificates being recorded in a global certificate, tokenization is an issue of a native token on a blockchain infrastructure, which materializes a right to the special fund. A look at the regulations in Germany shows that dematerialization according to the Electronic Securities Introduction Act (eWpG) is an “electronic fund” (e-fund), while tokenization in the above sense is based on the regulation on shares of crypto funds (KryptoFAV) and is defined there as “crypto funds” (K-Funds). The digital management of the share certificate register is the basis of both types of funds. This is essential as the backbone of all subsequent steps towards fully digital fund processing, including the digitization of fund sales. Blockchain-based ledger management is recommended for E and K funds, especially because blockchain technology itself is perfectly suited for this due to its immutability and provides a perfect basis for further digitization steps.

What does the dematerialization/tokenization of fund units bring?

Moving to an electronic ledger will result in new, simpler forms of fund distribution. For foreign investors in particular, it is becoming much more attractive to acquire German fund vehicles because Germany is establishing itself as a so-called “ledger market” (like Luxembourg) with the dematerialization of fund shares based on the eWpG and not only the costs for the global certificate are eliminated, but also the need to manage a repository in Germany. Investors can open a corresponding register account directly with the registrar and buy and sell fund units directly. This applies to both e-funds and K-funds and is a massive contribution to increasing the attractiveness of the German fund market in an international comparison, which many market participants do not even realize currently.

In this context, the question arises whether the K-Funds, i.e. the tokenization of fund units, has other advantages compared to the pure dematerialization achieved by E-Funds. This can currently be answered with a clear “no”. It is important, however, that this only applies to current observation from November 2022.

Basically, the tokenization of fund shares has huge potential for fund sales. The prerequisite for this, however, is that secondary marketplaces are formed on which these tokens can be traded accordingly, thereby creating entirely new sales channels for money issuers. Major international token exchanges such as crypto exchanges are currently only designed to offer crypto values. However, a gradual opening of these marketplaces to other asset classes such as funds can be expected in the coming years.

In addition to the digitization of fund sales, a DLT-based fund issuance brings other benefits as part of further digitization through the targeted use of smart contracts. If you look at the underlying process chain holistically, expensive activities can be digitized step by step using smart contracts and significant efficiencies can be achieved, such as:

What’s the point of all this anyway?

Most market participants, especially on the side of banks in the custodian role, confirm what was written above, but there is still a fundamental skepticism about the use of blockchain-based platforms. The main arguments that are repeatedly put forward strongly recall the fundamental obstacles to innovation:

There are countless examples from the past that show what happened to companies that used these four arguments. It is therefore much more interesting to focus on the advantages and advantages that market participants can already obtain when platforms such as fundsonchain are used: 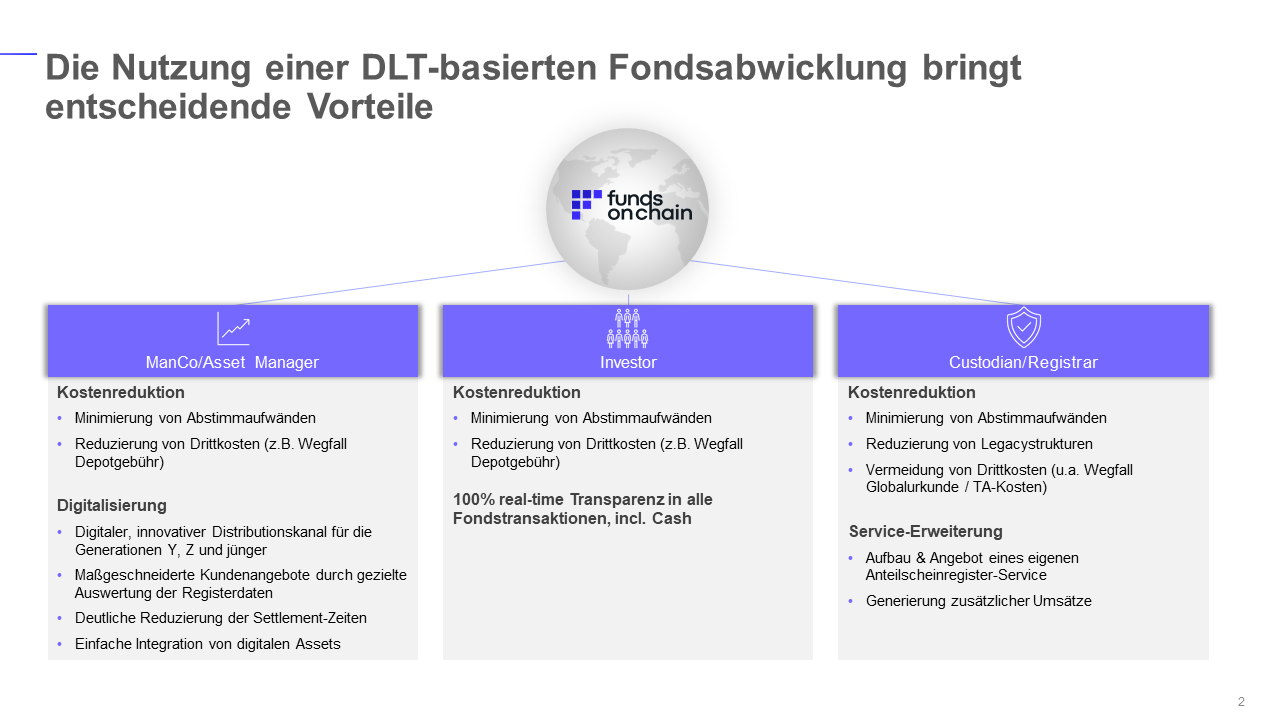 Targeted use of DLT for managing and processing fund records helps to minimize the people involved in the process, open up new digital sales channels, and realize cost and efficiency benefits .

The advantages are numerous, especially from the point of view of the bank:

Furthermore, the barriers to entry of white label platforms such as fundsonchain are low and the potential for cost and efficiency means that a break-even point for potential investments can already be reached within the first 12 years. month. If you combine this with the stable regulatory basis for DLT-based processing and fund share platform ledger management, it becomes clear that there is only one answer to the question of what is the best time to start digitizing stock certificate activity: now!