Web0! Which sow is still chased through the village? This is the wrong question; the right question is: “What is it Web3 and do we want this?”. Before having the sense of Web0 can understand must do this first Web3 be explained. TLDR: Web0 is the counter-proposal of Web3. Decentralized but better.

Before giving my opinion on Web3 explain, please sit back and relax and think about what you mean by the concept Web3 present. For mental stimulation, I’ll throw out a few terms for you: blockchain, NFT, decentralized, meta, metaverse, identity, virtual reality, legless avatars, next hype, token-based economy. Do you already feel the urge to gag, or is it yet to come?

Hold back your charms and read on.

The term Web3 was coined by Ethereum co-founder Gavin Wood in 2014 and refers to a “decentralized blockchain-based online ecosystem”. In 2021, the idea of Web3 in popularity, largely due to interest from cryptocurrency enthusiasts and investment from high-profile technologists and businesses.

Concrete visions for this Web3 have not yet been formulated. Described by Bloomberg as “fuzzy,” the term revolves around the idea of ​​decentralization and often includes blockchain technologies such as various cryptocurrencies and non-fungible tokens (NFTs). Bloomberg has Web3 described as an idea that would “build financial assets, in the form of tokens, into the inner workings of almost everything you do online.” Some visions are based on the concept of Decentralized Autonomous Organization (DAO). Another key concept is decentralized finance (DeFi), where users exchange money without the involvement of banks or governments. A self-determined identity allows users to identify themselves with SSH keys without depending on an external party, as is the case for example. B. would be the case with the OAuth authentication system.

A good approach to deciphering this mess is to look at the individual components:

The concept of a decentralized, chained ledger is a good idea in principle, but there are only a few useful use cases for it. Added to this is the massive waste of energy in securing this accounting (proof-of-work) or the looming plutocracy (proof-of-stake).

I don’t want to write anything about it except that cryptocurrencies and NFTs are the biggest organized crime of the 21st century. For this, I refer to the video by Fefe: Victim protection for NFT and Bitcoin believers.

The identification and billability of each participant is a central concept in the Web3. Every click, every online action, every visit must be identifiable and billable. You will become a complete “advertisement-worthy” product in the Web3.

Far from the two-dimensional monitor and in three-dimensional immersion. So you’re no longer just sitting in the front row, but part of the action. Imagine the odds of winning for ophthalmologists, gastroenterologists and psychiatrists. It is the economic development of the medical sector. Are you already sick or are you still sick?

What is tragic in this evolution is that people have become accustomed to the fact that there is only one supplier for a service. Please project this situation onto your weekend purchases: There is only Danone yogurt, there is only Heinz ketchup.

Decentralization (also called diversity) is an economic, social and political concept that has proven itself for centuries. Examples ?

I therefore see decentralization as a positive element of the Web3.

The Metaverse, aka Web3, is an auspicious backdrop staged by the Big Tech Bros (GAFAM) to inspire you to enter the next evolutionary stage of the Internet. It is essentially about better identifying users, better charging them, making them more dependent and easier to control. In return, you are promised relief from your sad life and a new religion under VR glasses.

Now I got a lot to say Web3 written but nothing about it yet Web0. Since a picture is worth a thousand words, I’ll start with this: 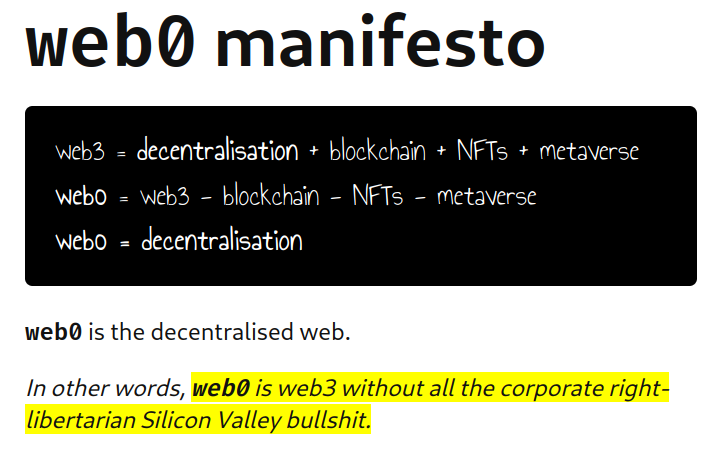 Web0 removes the bad parts of Web3 and leaves the only good part, decentralization. This is currently just a manifesto, consisting only of the image above and a long list of signatures. A manifesto is a public statement of goals and intentions. The term Web0 plays with the numbering of phases in the history of the Internet: Web 1.0, Web 2.0, Web3. Dot notation is deliberately omitted in order to create a counterpoint to Web3, which is usually also written without dot notation. The basic declaration of the Web0 Manifesto is:

Give us back the Internet as it was meant to be!